This lesson gives insights into the Variation specific View Changes ribbon action and how it determines the versions to compare.

It is important to understand that this button is always disabled if you see the button in context of a page which does not reside in a target variation label. You cannot use it (e.g.) in the source label. It is also disabled if the current page in the target label is a major version or if only one version has been propagated from source to target.

What the button allows you to do is to compare the most recently propagated source page version with the version of the source page which was last used to create an approved version in the target.

To give you an example: 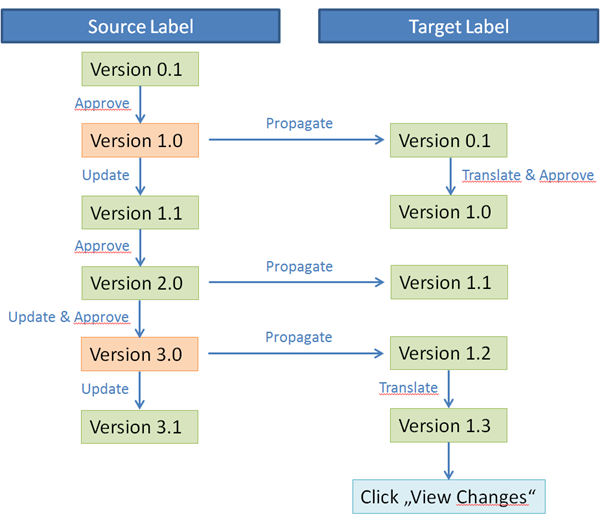 The Diagram above shows the following actions:

The question is now: how does SharePoint know which versions to compare?

When a new version is variated to the target label the variation system adds/updates the relationships list entry of the created/updated target page.

In a property of the target peer page

When a new version is variated to the target label the variation system preserves the previous value of the PreviousSpawnSourcePageVersion property of the list item in the target page.

This property is changed by the ItemUpdated event receiver when the page is either approved or scheduled to go live in the future. The event receiver will then copy the value of the LastPropagateSourcePageVersion from the relationships list entry into this property.

If both versions are the same, then the published version of the page in the target label is based on the last propagated source version.

If both versions are different, then at least one update has been propagated from source to target since the last version was published in target.

The View Changes ribbon action evaluates the version information stored in the LastPropagateSourcePageVersion column of the relationships list entry and in the PreviousSpawnSourcePageVersion property of the page.

The VersionDiff.aspx page comes with SharePoint Foundation and allows to compare the content in the different columns of a list item using the VersionDiffIterator control.