Relationship between Job and Timerjob

How many Timerjobs per Job?

With other words: a quick check to see if a running deployment is started through “Run Now” or through scheduling you can check the LastAsyncRunJobId field. If it contains a not empty GUID the job has been stated through Run Now.

Depending on the type of the job (export or import) and how the associated timer job was created (run now vs. scheduled) there are different naming conventions.

For both of these jobs you may have up to two timer jobs.

On the source system you can find the following content deployment timer jobs:

Timerjob title on the Target system

On the target system you will find the following two content deployment timer jobs:

In the picture above you can see all the jobs I discussed earlier for an ongoing content deployment operation. You will see the export and import jobs as the deployment in my test was done between different web application on the same farm. You can also see that the “deploy 4444” timer job is disabled as I did not configure scheduling on my system. The same applies to the relevant Quick Deploy job.

In the Timer Job Status page you will see the following information:

To list the existing timer jobs using custom code you can use the following code piece:

// enumerate all timerjobs associated with the service of the
// central admin site which hosts all content deployment jobs
foreach (SPJobDefinition jobDef in adminWssService.JobDefinitions)
{
// dump name and type in case that other jobs are also registered
// to the same service
Console.WriteLine(“Name: “+jobDef.Name+” (“+jobDef.TypeName+“)”);
}

It is indeed possible to execute a content deployment job outside the context of a Timerjob and in a different process than OWSTIMER.EXE. At least the export side. The import side will always be executed in OWSTIMER.EXE as this part of the operation is controlled through the web service communication as discussed in Part 4 of this series.

A very simple sample to execute a Content Deployment Job inside a Console application can be implemented using the following code:

If you execute the code above the export operation will be performed inside the console application and not in OWSTIMER.EXE. The interesting thing is that you can still monitor the process of the export and import operation from the Content Deployment Paths and Jobs page of the Central Admin.

You can also get additional information inside your custom code by implementing a couple event handlers:

But it is also possible to execute the Content Deployment Job as Timerjob inside OWSTIMER in case you would like to control when exactly to start the deployment.

This can be achieved by passing the value “true” to the Run method of the Content Deployment Job:

The value “true” indicates that the deployment should be performed asynchronously – which means it will be executed as Timerjob in OWSTIMER.EXE

There is one additional interesting flavor of the Run method which allows to incrementally deploy changes since a specific time in the past. E.g. the following code will deploy everything that has changed in the last 24 hours:

This method can be helpful in case that the target database had to be restored to a point in time before the last successful content deployment was done.

Be aware that you can also deploy incrementally using a DateTime value outside of a TimerJob by changing the first parameter of the Run method to false:

How to deal with stuck Timerjobs

How to identify such an issue

An indication that we have run into such an issue is that the Deployment Time inside the job has not changed for a long time. If you compare the start time and the Deployment Time, the sum of both should be near the current time. A couple of minutes difference are ok, but you should not see a huge difference here. 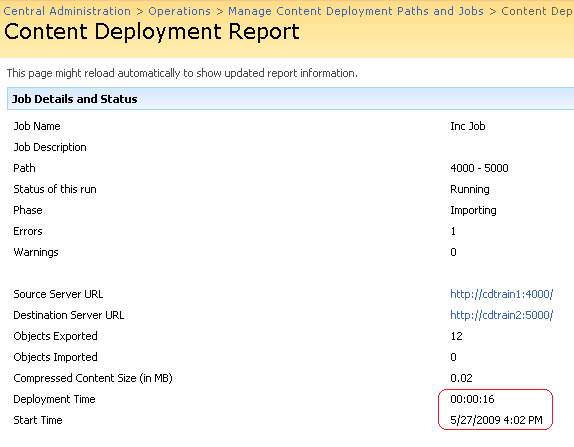 For example, here you will see a running scheduled timer job for the job listed above:

In the event that the job was a “Run Now” job, the name would not show up as friendly as above but would be replaced with the ItemId field of the content deployment job list item plus a random guid.

If you don’t find a running timer job related to your content deployment job listed here, then you have successfully identified the issue.

How to resolve such an issue

The recommended solution here is different depending on whether the job is stuck in the exporting or importing phase.

If it is stuck in exporting, then we can simply set the status to “Failure” to allow restarting the job again.

In case that it is stuck in the importing phase, we should change the status back to “Timed Out” to allow another check of the status on the target as the import might have succeeded and we would not want to redo the same deployment again.

To change the status you need to edit the relevant list item.

Attention! Direct modification of the values in the list item should only be done if really required! Also ensure not to change any other fields than the one listed below. In case that incorrect values are written back it might be required to delete and recreate the affected content deployment job! 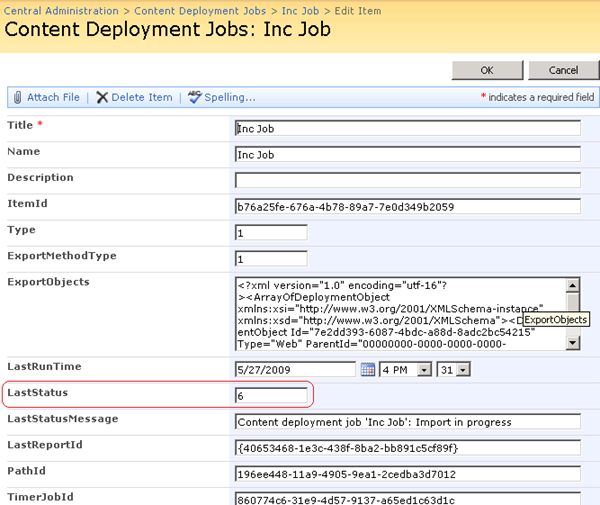 Here is a translation of the status codes:

If the problem has occurred during export, you now need to change LastStatus to 2 which means “Failure”. This allows the job to be restarted in the UI.

If the problem has occurred during import, you should change LastStatus to 13 which means “Import timed out” to re-enable the “Check Status” option in the UI to see if the Import has failed or succeeded.

How to deal with orphan Timerjobs

The last step of a content deployment job is to delete it’s timerjob definition if it is a one-time timer job. That means all import timer jobs will be deleted automatically and also all export timer jobs which were created using “Run Now”.

In some situations it can happen that this cleanup operation is not performed. These jobs would have to be deleted manually. I have seen systems where a customer ended up with several thousand old one-time timer jobs visible on the Timer Job Status page. Manual cleanup would take hours in such a situation.

To automate such a cleanup you can use the code below: