As discussed earlier I received a long list of warnings and errors when running the premigration check. The next entries in my list are a couple of errors of this type:

Hm… what should be invalid here was my first thought. Maybe the underscore char at the beginning of the channel name? That is a perfectly valid char in an URL so it is perfectly fine in MCMS to use this char.

Clicking on the error message to get more infos: 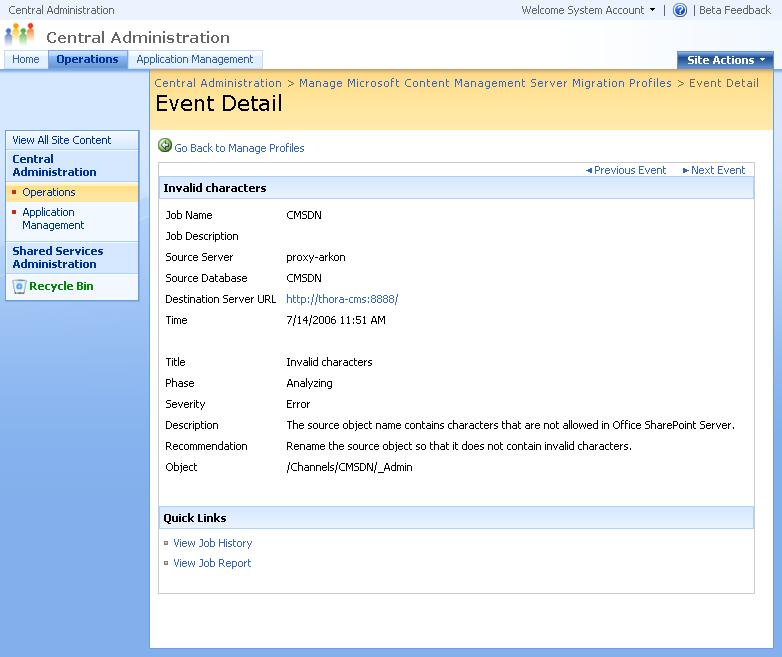 Not really more helpful as it does neither outline which character is invalid nor does it show a list with all valid or invalid characters.

Here are a couple more items which showed this warning:

The path for these items have a strange start: “/Schemas”. After I did some research based on the last part of the above path I found that all these items are actually template gallery items. It would be better to show the complete path for these template gallery items rather than just to prefix them with /Schemas. I hope this will be changed till release of the product.

Anyway: what’s wrong here? Again there are some special characters in the names of these Template gallery items which are perfectly valid for MCMS 2002 and can also occur in any customers database: Single quote (‘) and parentesis “(“, “)”. It seems MOSS does not like these chars in templates. More intersting: MOSS did not complain for when postings contain these chars. So there seems to be a different restriction for chars for templates and for posting names.

For your curiosity here are some more items which showed up in my database:

These items contains chars that are really invalid – even for MCMS 2002 as they contain special chars which have a special meaning on an URL like colon “:” and questionmark: “?”. MCMS does not allow to create items with such names.

So how have these items been added to the repository? The answer is that this database was created with an earlier version of MCMS: NCompass 4.0. Here the necessary checks when creating a new postings were not in place which could lead to such invalid item names.

Customers who plan to migrate to MOSS 2007 should analyze their repository content and try to analyze if there are special characters used in the name properties of items. If yes, they should rename these items to ensure that there are no conflicts with the reduced supported character set of MOSS 2007.

Hopefully the final version of MOSS 2007 will allow to automatically rename items with invalid characters so that there is no need to do this manually.